If there was one work that caused a stir in Madrid’s Salón de Otoño (Autumn Salon) in 1929, it was unquestionably Un mundo (A World) by a young and unknown painter called Ángeles Santos. The monumental painting, standing at 3 x 3 metres and executed in Valladolid by an artist who lacked first-hand knowledge of what was being produced in Europe during that period, mesmerised the intelligentsia at the time. Ramón Gómez de la Serna would write: “At the Salón de Otoño, submerged in the Retiro, a wreckage of leaves and mud, a revelation has emerged: the revelation of a seventeen-year-old girl. Ángeles Santos, who appears as the painting’s Saint Teresa, listening to doves and stars which dictate the feel her paintbrushes must have”.

Santos made a surprising, original and modern work built around references taken from her immediate surroundings and from avant-garde magazines and publications. The most important of these was Franz Roh’s book Magic Realism: Post-Expressionism, which, translated into Spanish in 1927, gave her insight, through photos at least, into the work of artists such as Joan Miró and members of the so-called New Objectivity from Germany, with which Un mundo has much in common.

This large-scale painting, made in 1929 by a very young Ángeles Santos, made a huge impression on intellectual and avant-garde circles at the time. In the images with visible light we can see the brushstrokes, the form upon which the composition settled, and how the artist built the small figures populating her world.

Macro photography makes it possible to track the thinnest layers of oil paint Santos employed to play with the texture and transparency of the canvas.

Equally, these heavily magnified images open up a journey through the many personages, scenes and details that inhabit the work.

Oblique angle light highlights the texture of both the painting and the canvas, and is used to study in minute detail certain problems with conserving the support and pictorial layer, for instance cracks and loose paint.

The image with ultraviolet light reveals a great deal in Un mundo as it manages to reveal the scope of the artist’s intervention on the work in 1987. The said intervention shows up in a deep purple tone and possibly accounts for over 40% of the work’s total surface.

Nevertheless, as this study verifies, two different intentions can be distinguished in the restoration of the work. On one hand, the area of the earth and the surrounding figures were reintegrated with small touch-ups, demonstrating Santos’ strong liking for respecting the painting that she executed 58 years earlier. And on the other, the area upon which “the world” floats was modified much more deliberately with large brushstrokes, perhaps with the aim of enhancing the blue around the globe.

The comparative study between images in the infrared range and those in visible light reveals concealed lines from underlying drawings dating from 1929.

These lines enable us to see the outlines of figures that never made it to the surface of Ángeles Santos’ personal world. More specifically, this occurs in the area of the beach and the river, where a personage in a canoe is discovered and was covered by the artist at a later stage.

Under infrared light, vanishing points also appear and were made by the artist to fit in the geometric figure of the aeroplane, located at the top right of the world.

Finally, it is worth noting how the head of the figure playing a musical instrument, located in the bottom right corner, had waves of hair — a style popular at that time — which were covered over, enabling the artist to create a more dreamlike feel. 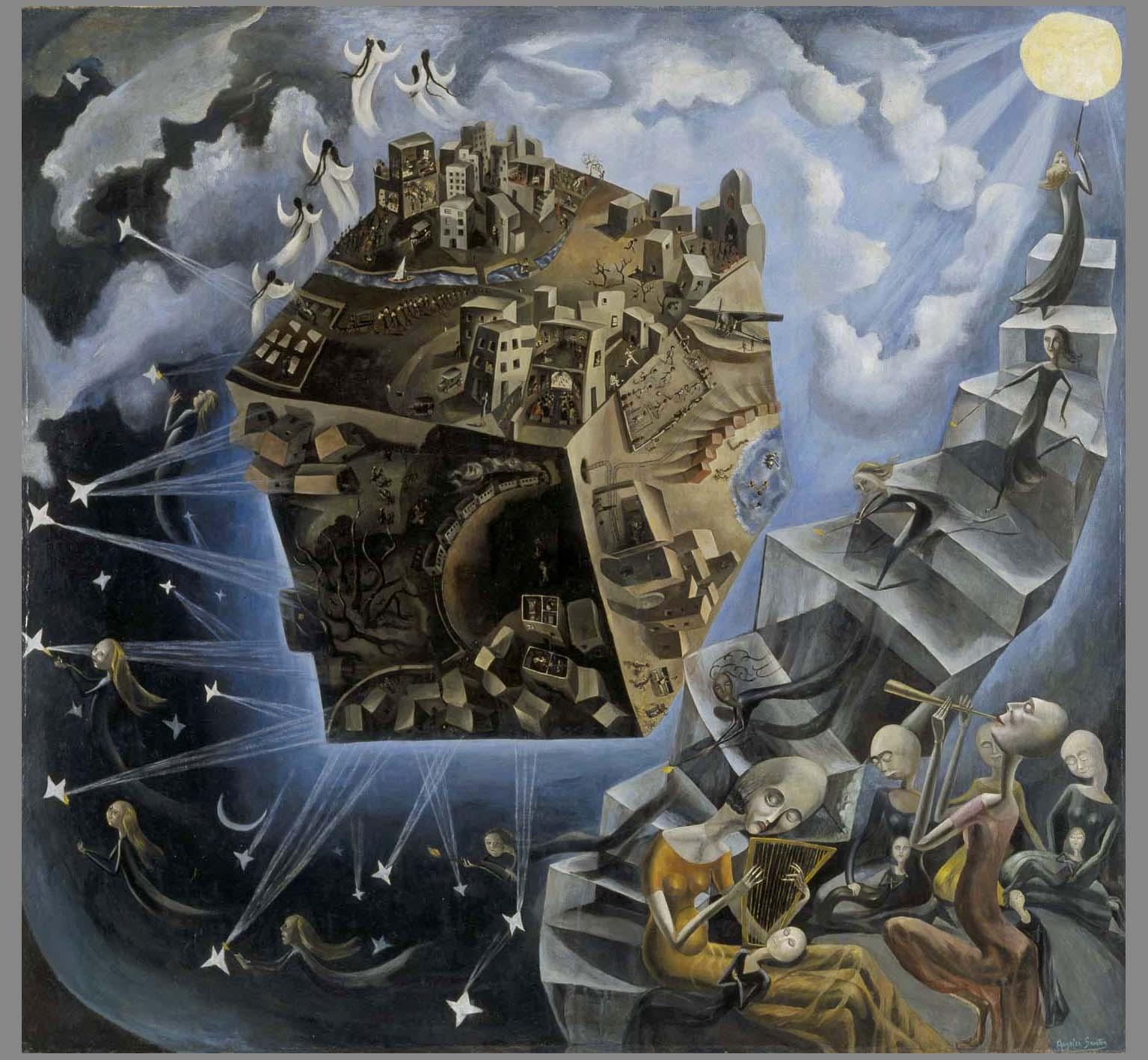