When María Blanchard settled in Paris in 1916 on a permanent basis, the city she had experienced on previous visits with Diego Rivera was already unrecognisable. The First World War had already upended every aspect of life, and a return to order and a reinstatement of classicism and tradition had taken root in art. Cubism was no exception to this trend and was discarding the experimentation that had characterised its origins, with its creations seeking greater legibility and formal clarity. In Paris, Blanchard would encounter some of the major representatives of this new style known as Synthetic Cubism: Juan Gris and Jean Metzinger, whom she met through Jacques Lipchitz and André Lothe, coming into contact with all of them at the L’effort Moderne gallery, managed by art dealer Léonce Rosenberg and a standard-bearer of this new style.

This painting corresponds to a period of collaboration and friendship between Blanchard and Juan Gris that saw her, like Gris, revise a classical theme from French pictorial tradition: personage as musical instrument. The artist composed the figure through interweaving, in two dimensions, geometric planes coloured with no apparent connection. The synthesis she would arrive at is extreme, with neither volume nor perspective, just precise details such as the guitar strings, an eye and three fingers to help recognise the figure represented.

Macro photography with visible light offers the chance to delve deeper into María Blanchard’s Cubist work and observe up close the texture of the coloured geometric marks that were so representative of this period in her career. The artist achieved a crafted flat, plain and uniform surface, with the highly subtle presence of brush or palette-knife lines, characteristic of her encaustic technique based on wax as the central component.

If we explore the different levels of magnification, by zooming in on the five wavy lines that represent the hair of the central figure, the brushstroke can be discerned in full definition. This constitutes one of the few details in which the movement of the artist’s hand can be clearly seen, contrasting with the cold geometric forms hiding such a technique.

The study with ultraviolet light shows the surface of the work veiled in a milky blue that reduces the contrast between colours. This glaze corresponds to the varnish applied, forming a considerably thick layer which is mostly uniform from a previous restoration.

At the bottom we can make out marks and dark violet spots of colour of differing intensities, corresponding to the previous colour retouchings made in all likelihood in the aforementioned intervention. Although these marks are located around different areas of the pictorial layer, a larger cluster running up the left margin is revealed.

In a similar way to the study under ultraviolet light, infrared photography demonstrates old retouchings, although in certain places it can also reveal with definition the reliefs of the paint losses, underscoring the amount of original paint hidden by the parts painted over.

Of particular interest is a comparison with the study with ultraviolet and infrared light in the pink area representing the figure’s left arm, where we can see the real size of the damage in a dark-grey tone. 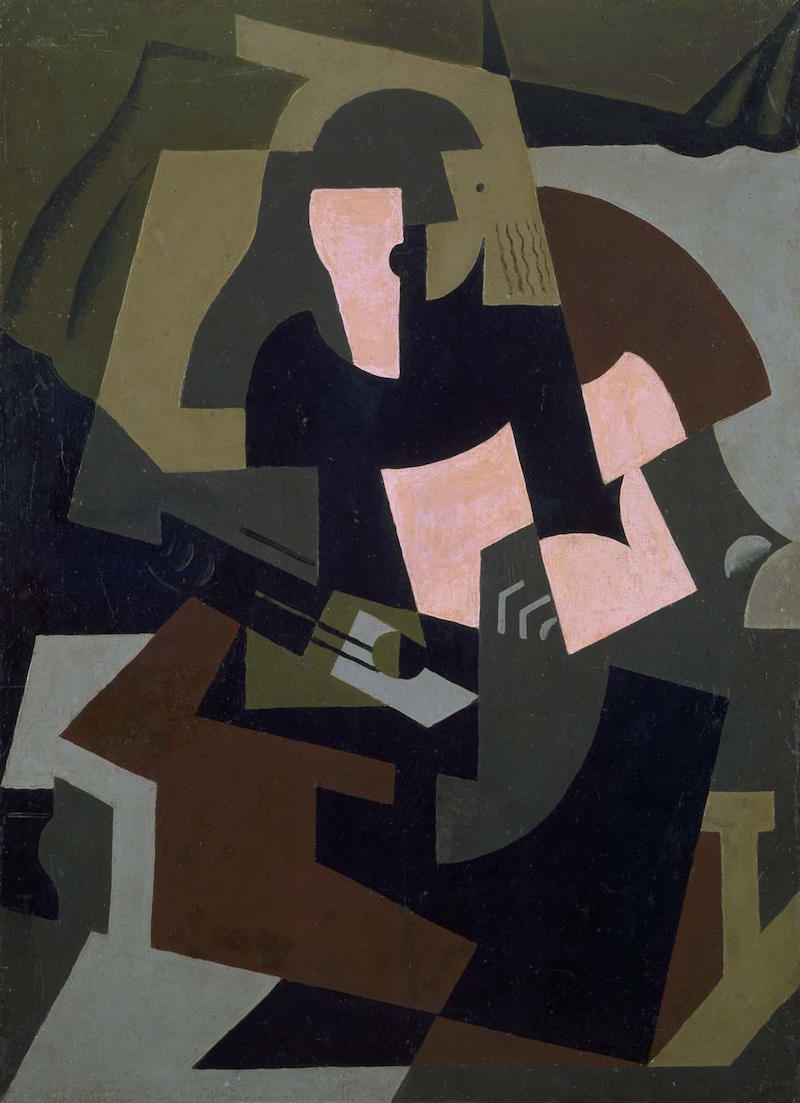